Sept. 15, 2014 -- Oak Park’s Village Hall has been named to the National Register of Historic Places, a significant designation that comes nearly a decade ahead of schedule. Typically, buildings and properties are eligible for inclusion on the venerable list after at least 50 years. Officials used a special criterion to permit Village Hall’s acceptance, due to its important place in the history of Oak Park.

Village Hall was constructed in 1975 from a design by the Chicago architecture firm of Harry Weese & Associates. The building reflects Weese’s modern design influence, with its open plan representing open government. 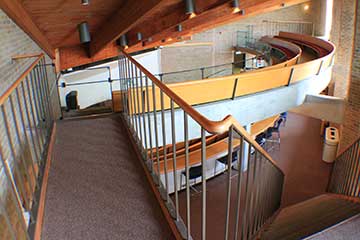 In addition to being the center of Oak Park’s municipal administration, Village Hall is historically significant in Oak Park’s efforts to achieve racial integration and community stabilization during the 1970s. The construction of Village Hall played a key role in Oak Park’s struggle to break the downward spiral of white flight from re-segregation and led Oak Park to become a model integrated community. The pioneering and continuing success of the Village of Oak Park in the Chicago region received national attention for the way it inspired and sustained racial integration.

The National Register, established in 1966, is the nation’s official list of historic places worthy of preservation, with over 86,000 listings. The Register recognizes properties of national significance, but also those that played important roles in the history of local communities.

National Register listing is first and foremost an honorary designation. Listing does not impose any restrictions on changes to the building. However, it provides a measure of protection by giving federal and state preservation agencies an opportunity to comment prior to funding, licensing or approving a project that will affect a property listed on or eligible for the National Register. This review process does not have the power to halt a project, but seeks ways to mitigate harmful impacts on historic properties.

For more information on historic preservation in Oak Park, contact Doug Kaarre at 708.358.5417 or email dkaarre@oak-park.us.