Feb. 21, 2019 – The overall crime rate in Oak Park was essentially unchanged in 2018 as compared to the prior year, according to data compiled by the Police Department for the FBI’s Uniform Crime Reporting Program that studies patterns and trends over time.

Oak Park Police investigated 15 more crimes in 2018 than in 2017. However, the two largest categories of crimes against individuals – robbery, which includes vehicle hijackings and assault/battery – declined in 2018.

“I understand how word of a specific crime or type of crime can shape one’s perception of personal safety,” he said. “But I also believe these numbers should allay the concerns of residents whose perception of crime may be based more on news reports and social media posts. The facts related to a crime often change from the initial reports as the investigation progresses toward an arrest.”

Reynolds pointed out that the crime rate in Oak Park remains low, as it has for many years, but added, “I know that statistics may not mean much to someone who has been a crime victim or has come face-to-face with a criminal. That’s why fighting crimes against individuals is such an important priority of the Oak Park Police Department.”

Oak Park Police investigated 1,650 crimes in 2018, compared to 1,635 in 2017. Burglaries and thefts, which historically represent the vast majority of crime in the Village, remained the biggest categories at nearly 87 percent of all crimes committed in the community in 2018.

Juvenile crime increased slightly from 2017, with four more crimes investigated in 2018 than the previous year. Juveniles were involved in 42 crimes in 2018, compared to 38 in 2017.

Police also reported eight arrests of juveniles on drug-related charges in 2018, down from 12 in 2017. All of the 2018 juvenile drug arrests were related to violations of the Illinois Cannabis Control Act. 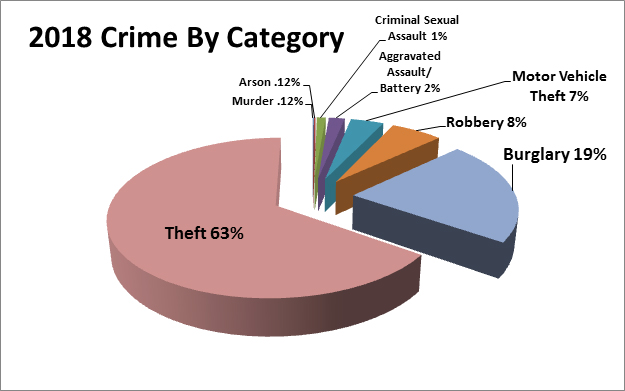 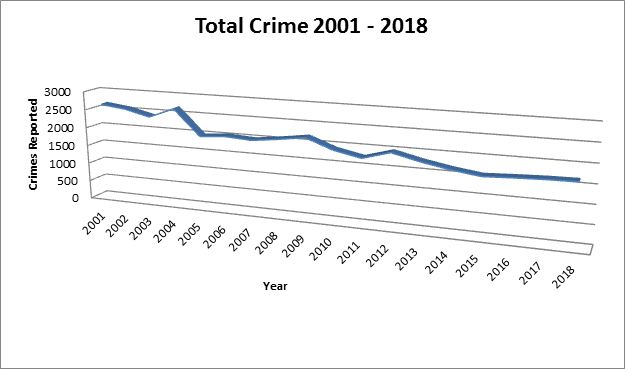