Oak Park Police investigated 166 more crimes in 2020 than in 2019, pushing the overall crime rate up about 10 percent, according to data compiled by the Police Department for the FBI’s Uniform Crime Reporting Program that studies patterns and trends over time.

The biggest increase came in thefts, which historically is the single largest category of crime reported in Oak Park. But the number of aggravated assault and battery cases was up as well, as police investigated 67 incidents in 2020 compared to 49 in 2019.

The deaths of a prominent local couple were the only homicides reported in 2020. Police continue to vigourously investigate the homicides with the help of regional, state and federal agencies.

Oak Park Police investigated 1,894 crimes in 2020, compared to 1,728 in 2019. Burglaries and thefts, property crimes that historically represent the majority of lawbreaking in the Village, remained the biggest categories at more than 85 percent of all crimes committed in the community in 2020.

Juvenile crime was down significantly in 2020, according to the report. Thirty-two crimes involving juveniles were investigated in 2020, compared to 67 in 2019. 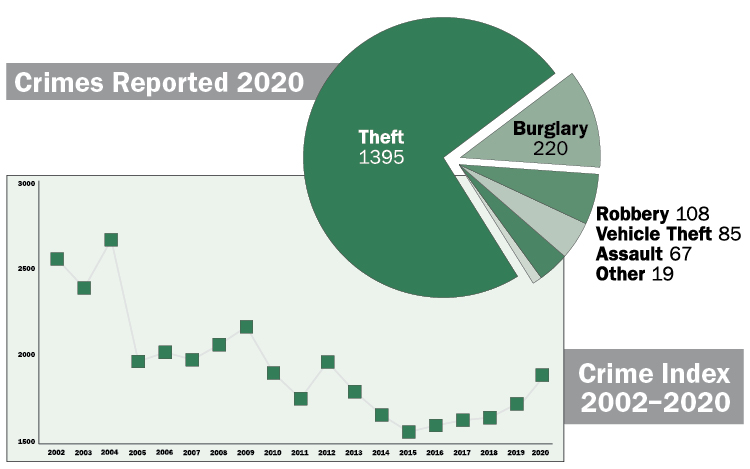