Crime down through first half of 2015

Oak Park Police are reporting a decline in crime through the first seven months of 2015, a decrease they attribute to the continued vigilance of citizens who take an active role in eliminating opportunities for crime and reporting suspicious activity.

The number of crimes reported from January through July of this year was down more than 20 percent as compared to the same period last year.

Police officials say active citizen involvement is reflected in the numbers not only so far this year, but over the past several years as the overall rate has continued to decline significantly.

Burglary incidents continue to trend downward, according to the police statistics, with 161 burglaries reported so far this year, compared to 262 in 2014. Twenty-six robberies were reported through July compared to 43 last year.

By the end of July, Police had responded to more than 18,370 calls for service, the majority of which were categorized as medium or low-priority calls, such as accidents with no injuries. When a high priority call is received, on average Oak Park Police arrive on the scene in about three and a half minutes. 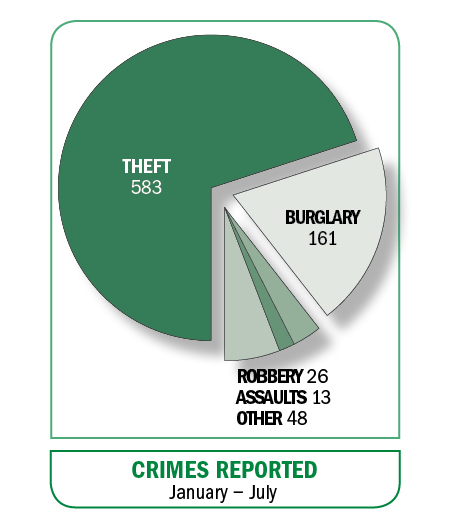