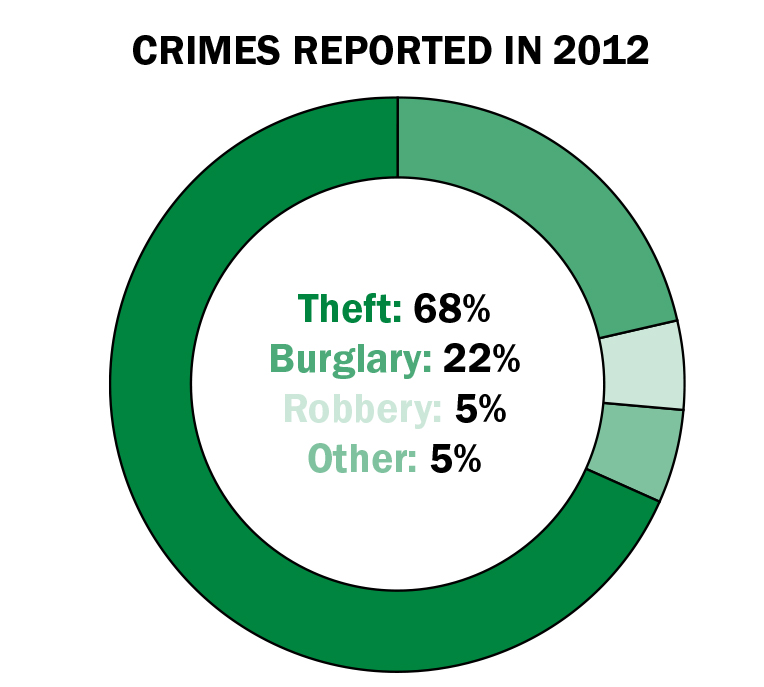 An increase in burglaries and thefts bumped up Oak Park’s crime rate in 2012, but robberies, a crime police say can have a significant impact on the public’s perception of safety, were at the lowest level in the past three years.

Arrests also were up in 2012 as compared to 2011, as police closed significantly more cases.

Oak Park Police investigated 202 more crimes in 2012 than in 2011. The 1,959 crimes reported in 2012 were up about 11 percent over the 1,757 reported in 2011, which was the lowest annual crime rate on the books. Despite the slight increase, the 2012 crime rate still ranks as the third lowest since the Police Department began keeping uniform statistics.

The increase in crimes committed here in 2012 came almost entirely from burglaries and thefts, crimes police say are often more about opportunity such as unlocked garage doors and unattended personal belongings. The 1,339 thefts and 424 burglaries represented nearly 90 percent of all crimes reported in Oak Park in 2012, a statistic that has varied little over the years, according to police.

The Oak Park data was compiled under the FBI’s Uniform Crime Reporting index, a system used by law enforcement agencies to collect and report statistics, with a focus on what are considered the most serious offenses – murder, criminal sexual assault, robbery, aggravated assault/battery, burglary, theft, motor vehicle theft and arson.

Below is a brief summary of crime in Oak Park during 2012: