Oak Park’s 2014 crime rate was the lowest in the 42 years since comparable information has been collected, according to data compiled under the state’s Uniform Crime Reporting Index by the Police Department.

Police investigated 1,665 crimes in the Village in 2014, down 7 percent from the 1,798 crimes reported in 2013 and far below Oak Park’s crime rates in the 1980s and 1990s that often were nearly double that of the last few years. Property crimes — thefts and burglaries — represented nearly 90 percent of all 2014 crime, a statistic that has remained virtually unchanged for many years.

Officials say the 2014 crime statistics reflect the collaboration of dedicated police officers and an active, engaged citizenry. They credit Oak Park’s focus on policing at the neighborhood level for creating an effective crime-fighting partnership that relies on the community’s support and active involvement with the law enforcement professionals who work to make the community safe.

Acknowledging that Oak Park data likely reflects the overall decline in crime nationally, Police Chief Rick C. Tanksley said he firmly believes that the combination of an engaged citizenry and professional, dedicated officers set Oak Park apart from other communities and has played a significant role in the declining local crime rate.

In addition, he said the use of crime data analysis to identify and strategically address emerging trends has led to quick police response times to calls for service and solving crimes at rates above the national average.

The data show that burglaries and thefts of property continued to represent the vast majority of all crimes committed in Oak Park in 2014. These two categories alone comprised nearly 90 percent of all 2014 crimes, with garages as burglars’ most frequent targets, police say.

Arrests also were down in 2014, according to the data, likely reflecting the decline in the overall crime rate. Police made 155 arrests in 2014 compared to 224 in 2013.  Nearly three quarters of the arrests were for burglaries, thefts and assaults.

The fact that the overall rate is at its lowest level in years really doesn’t mean a lot to a victim of a crime, according to the Police Chief who said that’s why the department continually strives to help residents feel safe by providing them the information they need to play a vital role in our crime-fighting initiatives. 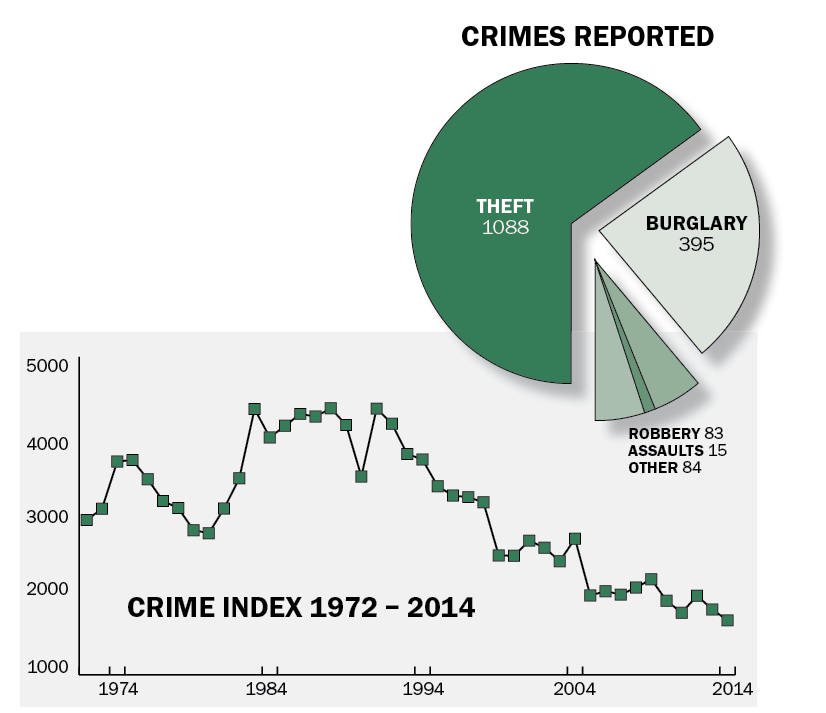