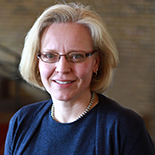 After a national search that attracted 41 applicants, the Village Board in January unanimously approved the selection of Cara Pavlicek to oversee the day-to-day administration of municipal services and programs as Oak Park’s Village Manager. Pavlicek had served in an interim capacity since March 1, 2012 following the resignation of Tom Barwin, who held the post for nearly five years.

Actually, Pavlicek has been with the Village since June 2008 when she was brought in to lead the Parking & Mobility Services Department, which manages a complex system of meters, surface lots, garages and thousands of permits and vehicle stickers.

Officials cited her extensive municipal management experience coupled with hands-on knowledge of Oak Park’s many programs and services as being key to making her the perfect candidate to fill the top executive role. Her role in developing the 2013 budget was especially illuminating of her skills, they said.