Aug. 20, 2019 – Much-needed repairs to the pedestrian bridge over the Eisenhower Expressway at Home Avenue are set to get underway, but the work will require closing the popular walkway for the entire month of September.

The project will include replacing sections of the structure and patching portions of the deck of the bridge, which has remained essentially unchanged since it was first built as part of the original I-290 construction in 1957.

Village staff and contractors have waged a virtually unending maintenance battle with the bridge for years, frequently applying temporary asphalt patches to the surface and, most recently, adding sheathing to its underside to protect motorists and trains below from the crumbling concrete.

“The Home Avenue pedestrian bridge has been on the Village’s infrastructure to do-list for some time,” explained Public Works Director John Wielebnicki. “But it is a complex project that requires approval from a number of jurisdictions in the Ike ditch below.

“Not only does the bridge cross the expressway, which is the jurisdiction of the Illinois Department of Transportation, it also spans the CTA Blue Line and the CSX Railroad tracks. Each of these organizations had a say in the scope and timing of the project.”

Wielebnicki said he understood the inconvenience the closing will cause, especially for Lincoln Elementary and Brooks Middle School students as well as the bicyclists who rely on the bridge as a shortcut across the expressway.

But after consideration of the options, engineers decided it would be best to make these much-needed repairs before another winter’s wear and tear, he added.

Oak Park Avenue will be designated as the safest alternate route over the expressway, which can then tie into existing safe school walking routes along  Harrison Street and the west side of Oak Park Avenue.

Village staff will be working with Elementary School District 97 and administrative personnel at the schools whose students will be most affected to make sure they have information to keep students and their parents up to date on the impacts and progress of the work.

Ample directional signage is planned and Village engineers are investigating strategies to ensure safe pedestrian and bicyclists travel along the alternate routes. 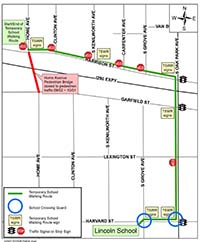