Aug. 1, 2016 – The Public Works Center is always abuzz with activity, but it’s not just the human workers making the noise this summer. The real buzz is coming from the 90,000 or so honey bees that are at home on the roof of the sprawling structure on South Boulevard at Lombard Avenue.

Seen as a potential extension of the Public Works Center’s green roof initiative, proponents have long stressed the benefits bees bring to the local ecosystem. But taking the step from idea to implementation required some professional skills beyond those typically found in municipal government.

The Village is working with the Westside Bee Boyz, a Chicago company that manages hives at more than 250 sites across the Chicagoland area, including downtown skyscrapers and notable destinations like Shedd Aquarium and Lincoln Park Zoo. The Village of Oak Park has joined a small group of other municipalities on the Westside Bee Boyz’s list of clients, including the Clarendon Hills Police Department and the Chicago Park District’s North Park Village Nature Center.

Forestry superintendent Rob Sproule manages the project and says he found a good partner in Westside Bee Boyz, who helped set up the two hives on the Public Works Center roof and provides the support to keep the bees buzzing happily along.

“A representative from Westside Bee Boyz visits about every two weeks to play the part of both doctor and landlord, making sure the bees in the hives are healthy and have enough space to go about their honey making business,” he said. “In between visits, I keep an eye on the hives and makes sure the bees have access to fresh water, which I have learned is a key element in the production of a hive.”

“It seems like everyone here at Public Works is interested in the honeybees,” Public Works Director John Wielebnicki. “It’s a pretty cool experience to walk right by them and they don’t bother you. These are honeybees, not the wasps or hornets that buzz around your soda while you’re sitting on the porch.”

Honey bees play a crucial role as pollinators for flowering plants, but recent declines in the honey bee population is causing alarm given that a third of the American diet is in some way a product of pollination by bees and other insects.

According to the USDA, last year beekeepers in the United States reported honey bee colony loss that is nearly three times higher than the acceptable winter loss rate of 15 percent. This continues a trend over the past decade of elevated levels of colony loss that can be attributed to pesticides, loss of habitat, climate change and disease, according to the Natural Resources Defense Council.

While the two hives on the roof of the Oak Park Public Works Center won’t solve the wider problem, the Village’s program does promote a healthy environment for bees. It also assists the West Side Bee Boyz in their mission of strengthening the local honey bee populations by broadening genetic diversification in hopes of developing a bee population built to withstand the climate in the Chicago area.

In Oak Park, property owners can establish up to two honeybee colonies as long as the apiary meets specific Village code requirements. For more information call 708.358.5480 or email health@oak-park.us. 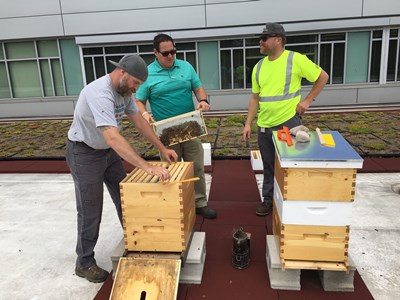